People are often inspired by movies that feature characters in their own profession. For example, firefighters have Backdraft, boxers have Rocky, teachers have Dangerous Minds, stockbrokers have Wall Street, and cyborg assassins have The Terminator. The list goes on. As for me, I love to watch movies about writers. Here are some of my favorites:

Capote: This movie’s portrayal of Truman Capote as he researched In Cold Blood is nothing less than riveting. Philip Seymour Hoffman’s Oscar is well deserved. Infamous with Toby Jones is another fine film showing the legendary Capote at work.

Secret Window: Johnny Depp plays a mystery writer working on a new book at a secluded lakeside cabin. Trouble ensues when a mysterious stranger shows up accusing him of plagiarism. What follows is a barrel of eerie fun.

Stranger Than Fiction: Have you ever wondered if fictional characters actually exist, living out their lives in some alternate universe? This is sort of what happens when a famous novelist (Emma Thompson) finds that one of her main characters (Will Ferrell) is a living, breathing person. There are some hilarious scenes as Ferrell’s character hears Thompson’s voice narrating the events of his life. The movie also offers insights into how authors develop, write, and learn from their characters.

Misery: Bestselling author Paul Sheldon (James Caan) is rescued from a car crash in a blizzard by his “number one fan” (Kathy Bates). She takes him back to her house in the mountains and they drink cocoa and spend a delightful evening discussing his books. Well, as the title suggests, that’s not exactly what happens.

The Shining: “All work and no play makes Jack a dull boy.” What writer hasn’t typed that line over and over for hours on end?

Adaptation: A bizarre look at a screenwriter who struggles to adapt a novel for the big screen. Though a strange ride, there is plenty for writers to identify with in this movie.

Finding Neverland: Tells the story of J.M. Barrie as he worked on Peter Pan. This film reveals the magic of storytelling and the power of imagination. And, amazingly, Johnny Depp is not at all creepy as a grown man who neglects his wife to play with four boys he meets at a park.

Factotum: Shows the unglamorous life of an aspiring writer. Sometimes depressing and sometimes funny, the story of Hank Chinaski (Matt Dillon) provides a reality lesson for those who would seek to make a living with the pen. Despite the long odds he faces, Hank offers several motivating reflections on writing and its rewards.
Posted by Kent Krause at 12:59 PM No comments:

Sal Kishman at the All-Star Game

Tonight the 80th All-Star Game will be played at Busch Stadium in St. Louis. The first time St. Louis hosted an All-Star Game was on July 10, 1940. Played at Sportsman’s Park, it was Major League Baseball’s eighth midsummer classic. Sal Kishman, one of the characters in The All-American King, homered in the seventh inning of that contest to help the National League claim its third ever All-Star victory.

Born on September 9, 1917, in Des Moines, Iowa, Sal Kishman led his American Legion baseball team to the 1934 state title. After graduating from Eastridge High, Kishman starred for the minor league Des Moines Demons in 1936 and 1937. The following year, he broke into the majors with the Philadelphia Phillies. Kishman, who batted left and threw right, became a fan favorite in the City of Brotherly Love. The right fielder was one of the top sluggers in the National League until the Marines drafted him before the 1943 season.

Posted by Kent Krause at 2:27 PM No comments: 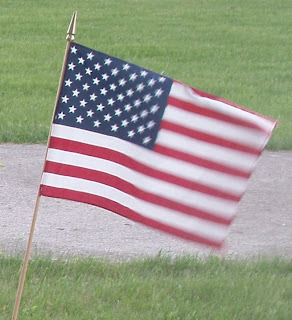 Have a happy and safe weekend as you celebrate the All-American holiday.
Posted by Kent Krause at 11:27 AM No comments: