The 2013 World Series begins tonight with the St. Louis Cardinals battling the Boston Red Sox. These teams are no strangers to October baseball. Winners of the first World Series in 1903, the Red Sox will be playing in their thirteenth Fall Classic.

St. Louis is making its nineteenth World Series appearance, including four times in the last ten years. The Cards played their first World Series in 1926 when they took on Babe Ruth and Lou Gehrig's New York Yankees. The seventh game featured one of the most dramatic moments in Series history.

Baseball a Century Ago

It is October and Major League Baseball is well into its postseason. This week the divisional rounds will be decided and the ALCS and NLCS will begin. One hundred years ago the best teams in baseball similarly battled each other in October. There was only one round back then, the World Series. And the games went a lot faster in 1913, with contests usually lasting between two and two and a half hours. Game 5 of the World Series that year was completed in just one hour and 39 minutes.

The image below is from Game 2 of the 1913 World Series at Shibe Park in Philadelphia. The New York Giants defated the Philadelphia Athletics 3-0 in Christy Mathewson's last victory in the fall classic. The Athletics, however, prevailed in the Series four games to one, bringing manager Connie Mack his third championship. 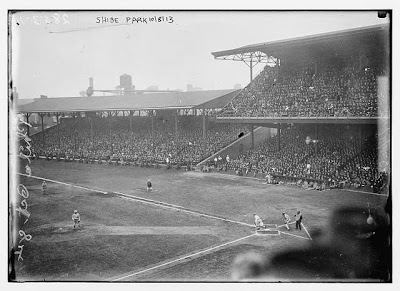